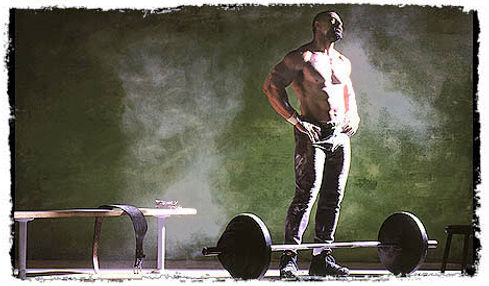 At the end of 2011 I made some choices about my goals. At that time I was around 70kg while being 1.76 tall. The latter is not changeable but my weight is. The 70kg gave me no advantage in windsurfing, quite the oposit. Being this light gave me very little leverage over my gear and I could not get any decent speed with my formulaquiver nor with my slalomquiver. So, as I started this story, at the end of 2011 I decided to gain weight for more leverage.

I saw two options, become heavy by eating more then maintenance and then getting exces bodyfat which would then contribute to my weight….. Or try to start gaining muscle and becoming heavier through more muscles. The latter was more appealing then the first, so…
I joined a fitness club and started the regular trainingprotocol a lot of fitness centra use. Doing 3 sets of 15 on several machines for 6 weeks and then change the program etc……

It was not rewarding what so ever. Hardly gained any, no strenght and no weight.
So I started to search the internet and got lost in the overwhelming advices you can find there. All are great guys (and some girls) who have the best trainingsprotocol bla bla bla…

But i digged and digged and finaly found some consistency in all that is out there. To become more muscalur it is best to become stronger. And to become stronger the consensus is that this is best done through high weights and low repetitions while performing compound excersises.

So, I then found the 5×5 trainingsprotocol.

At the same time I also learned that diet is as important as the weighttraining. The real effect of the training comes when you rest and with the correct diet the body can start growing.
The diet was simple in its concept but pretty hard to follow. Only eat what is clean, no processed foods, only clean. A lot of vegetables, chicken, beef etc and again all clean. Up to now this is stil a big challenge. I have an option on clean meatproducts. I still have not found milk straight from grassfed cows, so I substitute for the best I can get my hands on. I try to eat as clean as possible but it is not easy also while my kids live with me for the half of every week. But ok, I try.

I started the training on 5×5 strenghttraining. This is a simple concept of 5 sets of 5 reps. Only two workouts that are altered every training. Total of three trainingdays a week. All excerises used are so called compound or fullbody excersises. All done with a free barbell.

So no machines anymore but only free excersises with a olympic barbel.
I started the program as adviced with only the barbel with no weights and then adding 2.5 kg every training. In the beginning the training was easy but this was fine because I needed all trainingsessions to learn and master the technique of these compound excersises.

I consistently addes weight and with my diet in place I slowly started gaining some muscle and some weight. But it is difficult to gain weight and no fat at the same time. The diet needs to be spot on to gain clean muscle only and my diet is still my biggest challenge. So I not only gained muscle but also fat. Over the winterperiod this is not a big problem for me but as soon as the temperatures rise I have the urge to trim down the fat. This is a complete different ballgame….still haven’t mastered that……

So big jump ahead, now in the beginning of 2013 my weight is around 86kg. That is 16 kg more then I was when I started this journey. Over the summer of 2012 I did not do strengttraining only windsurfing and some running and cycling. I started again after the season and was then 78kg.
My weight has gone up significantly but so has my fat ;-(. I will try to get more ripped by adding some intervaltraining while maintaning the strenghttraining. I made some minor tweaks to the program. Instead of 5×5 I use 5×10 for the squats and 5×7 for all other excersises. This to make it slightly more powertraining then pure strengttraining. This gives me a little more endurance.

So, what is the the result now:
– I have found the weightgaining not that hard after all. It took me some time to learn what works but with the 5×5 and the correct diet (and the rest in place) it is possible to gain weight through a more muscular body without gaining to much fat.
– I found the diet part the hardest cause it is almost impossible to get easy acces to really clean products like chicken, beef, eggs etc. This is still a big issue.
– In the proces I have found myself a new sport. The strengthtraining by itself is really great and has become more then a tool to be fit for my windsurfing. I have found a new sport to do over the wintertime. It is not only for my windsurfing anymore but is a part of my sports I like to do.

In 2012 I have already experienced that I could gain more speed and had better leverage over my gear. Now at the start of 2013 I am really curious to findout what my extra weight will do for my windsurfing level. I will update that as soon as we start going on the wat again.

At last, what I have found most rewarding is not the endresult but the proces itself. i have learned a lot about myself. Going to a training knowing what weights to lift and not sure if i’m capable creates a mindset and dedication that I really love. I have had some trainingpartnres but necer for long so most of the proces is my fight against the weights that where ever increasing up till the moment that I could not make progress and had to deload and start pushing again at a lower weight trying to push through the next level when I reached this missed weight when I again would reach that weight. Really a learning process. Love this action as much as i love the windsurfing!